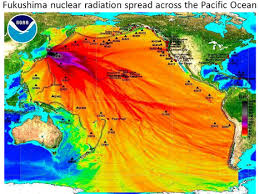 Journal, Apr 6, 2015: BREAKING NEWS Scientists detect Fukushima radiation on North American shores — Seaborne radiation from Japan’s Fukushima nuclear disaster has reached North America… cesium-134 and cesium-137 in a sample of seawater taken in February from a dock on Vancouver Island… It’s the first time radioactivity from the March 2011 triple meltdown has been identified on West Coast shores [see: April 2011 — California seawater squeezed from kelp sample had 400,000 Bq/m3 of Iodine-131]… sample was taken Feb. 19… It contained 1.5 becquerels per cubic meter (Bq/m3) of cesium-134, the Fukushima fingerprint, and 5 Bq/m3 of cesium-137 [actually 1.4 and 5.8, respectively]… Fukushima radiation concernscoastal communities… models have predicted that in general, the plume would hit the shore in the north first, then head south toward California… currents can be unpredictable… Woods Hole has received support from the National Science Foundation to analyze about 250 seawater samples that will be collected next month…

CTVNews, Apr 6, 2015: First low-level trace of Fukushima radioactivity detected off B.C. — But the levels are so low they are likely of little concern… Still, researchers say this is the first detectable of radioactivity from Fukushima found in a water sample taken from the U.S. and Canadian West Coast… Ken Buesseler, a marine chemist at WHOI who has been measuring radioactivity in Pacific seawater since 2011, says it’s been important to carefully monitor the oceans, given that the Fukushima disaster saw the largest accidental release of radioactive contaminants to the oceans in history.

Buesseler’s statement: “Even if the levels were twice as high, you could still swim in the ocean for six hours every day for a year and receive a dose more than a thousand times less than a single dental X-ray. While that’s not zero, that’s a very low risk.. We expect more of the sites will show detectable levels… Predicting the spread of radiation becomes more complex the closer it gets.”

CBC Radio, March 2015: Four years after the nuclear disaster in Fukushima, scientists like UVic’s Jay Cullen are still monitoring the Pacific waters near us for radiation. Listen to what he’s found and what he hasn’t… Cullen: “If we see cesium-134 in a water sample or a fish for example we know that that’s been affected by the Fukushima disaster… Not only is cesium a marker for other isotopes that were released… it also represents a potential radiological health risk because if its internalized… it can damage our cells and cause illness. So the risk of illness appearing in individuals relates to the activity, how much of that isotope ends up in their body. Given the nature of this disaster, with most of the isotopes going into the North Pacific Ocean, the most likely way that a human being would be exposed to this radioactivity at this point would be through the consumption of seafood.” >> Full interview here